We were delighted to recently receive for the collection a Victorian album of botanical illustrations created by Emma Dennett, the daughter of the Castle custodian in the 1840s. The album is fascinating, with exquisitely executed pictures of local plants and flowers, many of which were growing in the castle grounds, alongside details of their species and extracts of poetry. It is of particular interest as some of the species can no longer be found on the Island.

Dr Colin Pope, former Ecology Officer for the IW Council, explains:
“It is a beautiful illustrated book, a hobby of leisured Victorian ladies with time on their hands. The illustrations represent a good range of flowering plants to be found on the Island in the 1840s. They include:
Fly Orchid (now extinct on the Island)
Wood Calamint (dated 1846) which only grows in the UK in a single locality on the Island. It was discovered here by Dr William Bromfield in 1843 (or possibly by Sir David Brewster in 1841) so Emma Dennett was painting it soon after its discovery
Many species no longer occurring in the localities where she found them, such as Rue-leaved Saxifrage growing on the walls of Carisbrooke Castle. It no longer occurs here but still survives (just!) on the old Quarr Abbey ruins; and Bilberry on St George’s Down and Marvel Copse;
Some of the more unusual plants come from popular Victorian plant hunting sites such as Blackpan Common, Sandown; and marshes at Alverstone.
Many of the illustrations are delightful paintings of common wayside flowers.
One interesting painting depicts Greater Butterfly Orchid collected at Briddlesford Copse. There are no other records of this plant from here; indeed it was a wood which was little visited. We were both surprised and delighted to find Butterfly Orchid in Briddlesford Copse a few years back and, thanks to Emma Dennett’s paintings, we knew that it was growing here in 1847.”

The album is currently being transcribed and photographed by museum volunteers and we hope to be able to exhibit it in the near future.

Lords and Ladies by Emma Dennett 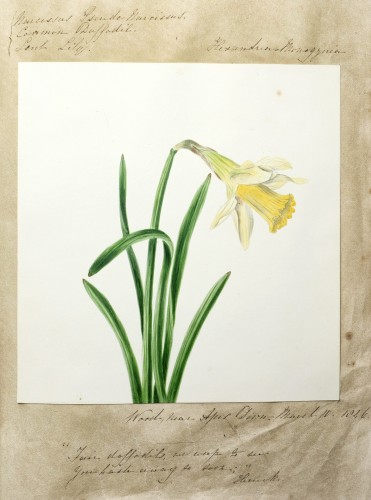